I first heard of Doi Inthanon from a fellow on a big bike.

I used to sit in a smoothie bar, Jojo Smoothies, that my friend Korn owned. I would sit in there working on my computer usually, editing or writing or coding, and have my GIANT cup that Korn would make me a smoothie in.

Sitting there, I began to meet people that would come in. They’d order their thing and then casually walk in, not sure if they should sit down or walk back out or what. I’d be there, and usual etiquette is to sit not too close but close enough to get brought into a conversation when one is happening.

He had his big adventure bike and was talking about how he had come to Thailand for 10 years in a row to tour through Thailand, Myanmar, Laos, Vietnam, and Cambodia, and how now it was all different. Regulations and borders. “The tallest mountain in Asia is right at your doorstep! And there’s a killer bike route that takes you from Doi Inthanon all the way up the border of Myanmar to Pai, and then back to Chiang Mai.”

I also sat in Jikko Café most of the mornings where I had my espresso and got to meet the people that came into there. We kind of started to have a group of us that would hang out or do some adventures together. One day, G and Tak came into the café and said: “Ned, let’s go to Doi Inthanon.” “I’m in!”

We woke before light and were probably 3/4 the way there before the sun came up, so we beat most of the other people that make it a busy destination. The whole way there and back I was all eyes for the road we were traveling. Truly a beautiful country and landscape. So many things to see.

This is what we saw while hiking around on Doi Inthanon.

In the summer of 2019 my girlfriend, Crystal, and I drove across Canada to pick up a load in a cargo trailer from long term storage to bring back across Canada to our farm. For me, this had been the fourth year in a row to make this exact same trip, but for Crystal it was her first time being past Northern Ontario driving.

We slept in the empty trailer on the way West, which was an absolute luxury. We tried to pull off the side of the road so we wouldn’t have to get a campsite, but it was during the time of the nation wide man hunt for the two young fugitives from Vancouver Island so we were always just a little bit on edge when we’d find a nice place to stop. Nothing like a little danger to keep a trip exciting. I like to put little camp symbols on our oversized map so that in future years we know where a good campsite is. It’s probably not necessary because there are campsites in nearly every town, but sometimes you’re sitting there thinking to yourself: “I know the campsite was somewhere in this part of the country, but I just don’t remember the name of the little adorable town it was located in.” So there, on the map, is a little camp symbol that solves the mystery.

I think one of the more memorable things for me was when we stopped in the Fraser Canyon of BC to look down the canyon on a particularly beautiful turn in the river, and behind us we hear a few rocks tumbling down. I was worried because the truck was below those rocks, but up up up we see some goats following an ancient trail. First a big male goes to show the way, then a few females, then about 5 little kids make their way across! What a sight! Sometimes it’s easy for me to get caught up in our modern industrialized and urbanized world and feel like our wildlife is a thing of the past, that we no longer have any, and then seeing something like this makes me realize that there is still something out there untamed, wild, free, true.

At this point, we were on our way to Port Renfrew on Vancouver Island. Seeing the wild Pacific Coast one last time was pretty special for us. I remember growing up I always wanted to live in Vancouver. The wild old growth forests and the gnarly roots everywhere was to me something very special. In fact, it was in the mountains around Vancouver that I really started photographing as I hiked endlessly. For Crystal, it was her first time seeing the giant cedars and firs and the wild, rugged coastline of the open Pacific Ocean.

And just like that, it was time for us to zip back to Atlantic Canada and back to the farm.

When I arrived in Bangkok in the winter of 2017, I met up with Donovan. He rented a scooter and showed me around like a local. One day while sitting in the restaurant at his swanky hotel he said: “Ned, I have to go see about a job up in Chiang Mai. I think we should catch the night train and head up together. You’d love it up there.”

I balked, hesitated, and deliberated (I guess I was still not in the journey mindset I so love and appreciate). I had just got to Bangkok and was just feeling grounded and my goal was to find a great place and enjoy the winter in peace.

Another friend of mine, Alex, was also up in Chiang Mai for a lantern festival and had told me that was her destination. Generally while traveling I kind of let the forces of the world lead me forth so my research is more along the lines of asking a local what I should do. Lantern festival? What’s this, never heard of it.

Loi Krathong (Thai: ลอยกระทง, pronounced [lɔ̄ːj krā.tʰōŋ]) is a Siamese festival celebrated annually throughout the Kingdom of Thailand and in nearby countries with significant southwestern Tai cultures (Laos, Shan, Mon, Tanintharyi, Kelantan, Kedah and Xishuangbanna). The name could be translated as “to float a basket,” and comes from the tradition of making krathong or buoyant, decorated baskets, which are then floated on a river.

Loi Krathong takes place on the evening of the full moon of the 12th month in the traditional Thai lunar calendar, thus the exact date of the festival changes every year. In the Western calendar this usually falls in the month of November. In Chang Mai, the festival lasts three days, and in 2018, the dates were 21–23 November.

I arrived three days before Loi Krathong. I watched the city amp up for the celebrations. I saw the quiet city before, I felt the roar coming. It was truly a crazy experience. It was hard to find a place to stay, the main streets were all pedestrian traffic. Locals I’m sure stayed mostly away except to capitalize on the tourists by selling things. And then, just like that, it was all over and the city cleaned up.

At a point in the festival I had stumbled upon a beautiful Wat (temple) that people were allowed to be inside and setting off the lanterns. It was mesmerizing watching everybody set them off. After that moment of brilliance, I suddenly began seeing everybody around me and turned my lens more towards them, all sweaty, tired, drunk, and saturated.

For the winter of 2017-2018 I went to Thailand to… I guess find the cheapest rent and learn about a new culture. Truth be told, I really just wanted to be on the land of our farm building, but as it was, going to Thailand was an incredibly beautiful experience that I would not change for the world.

I spent about 5 months in Thailand, and most of my time was in Chiang Mai. I arrived in Bangkok and immediately met up with my friend Donovan. He invited me to join him on a train trip up to Chiang Mai where he was going to see about work. Most people take the sleeper train over night, but it was sold out so we took the day train. I actually really liked it since we were able to watch the city as we rolled on by.

I came to know Chiang Mai quite well. The cafés I came across astounded me. The people I met blew me away with kindness and generosity. The landscape was as expected. And I had a scooter and motorcycle to cruise around on the whole time! I was, I guess, in heaven. My family is still now hearing stories I remember as we go about our daily, and each time the stories come to mind, I smile a deeply felt smile.

The next few posts will be devoted to the time I spent in Chiang Mai. Please say hello if you’d like to talk more about any of the photos and I will do my best to caption them. 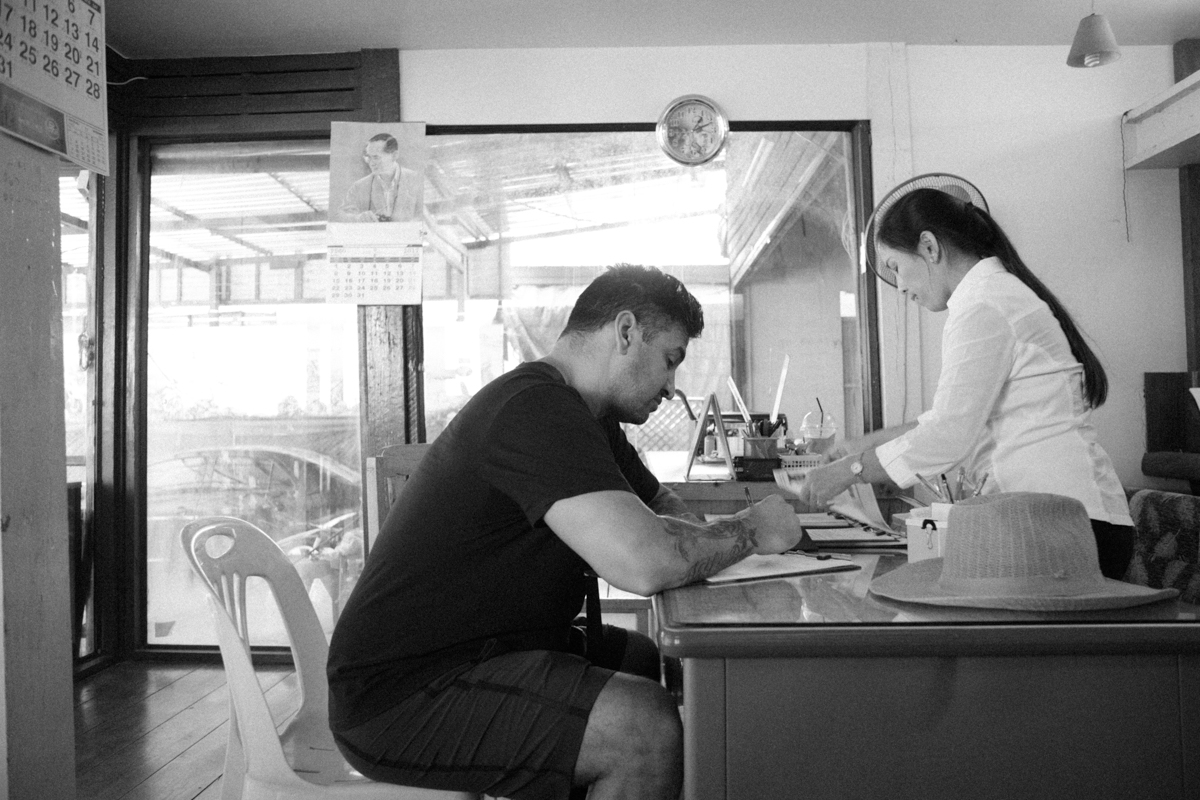 END_OF_DOCUMENT_TOKEN_TO_BE_REPLACED

It seems like ages ago now when I was first in Bangkok. At the time, it was definitely a blur. I had just landed from Canada and in the process of trying to wrap my head around the fact that I was in Thailand. Do you know that feeling when you get to a new place by plane and realize that just the day before you were walking the streets of where you came from, likely a point a fair distance across the map from where you stand now? To regain my bearings, I usually try to lay low, just wandering the local streets trying to figure out where a good place to eat is.

I had a few friends in Bangkok that I met up with over the week I spent there, which is always good for me because they tend to have a list of things they want to do or see and I can just accompany with a smile. I left Bangkok in the same fashion, I had one friend, Alex, up there already for Loy Krathong, and another, Donovan, wanting to go up for work and to also catch Loy Krathong. When the latter asked me for the second time if I wanted to take the 12 hr train (turned into about 14 hrs) to catch the lantern festival (Loy Krathong), I decided to go on this journey.

So I ended up staying then in Bangkok for about 5 days. I wandered many streets and thoroughly enjoyed Chinatown. Such a busy area with vibrant storefronts and markets that I could walk through. I did a whole bunch of street photography with Donovan, since that’s his style of choice, which you’ll see soon in a photoblog of its own. Often, I’d find myself just wandering, wandering, wandering and running straight into a marvelously decorated temple or busy market. Each night, my sandals would come off, my dirty feet would be washed, and I’d collapse into my bed wondering how I’d get some relief from the humid and warm temperature I don’t think anybody ever can quite adjust to.

I resisted leaving because I didn’t feel I had explored the city as I had hoped. I think I’m learning that I never really feel like I’ve explored any place I’m at fully, and I think I’m ok with this. I think this is a great outlook for life to be on an adventure even in one’s own backyard. 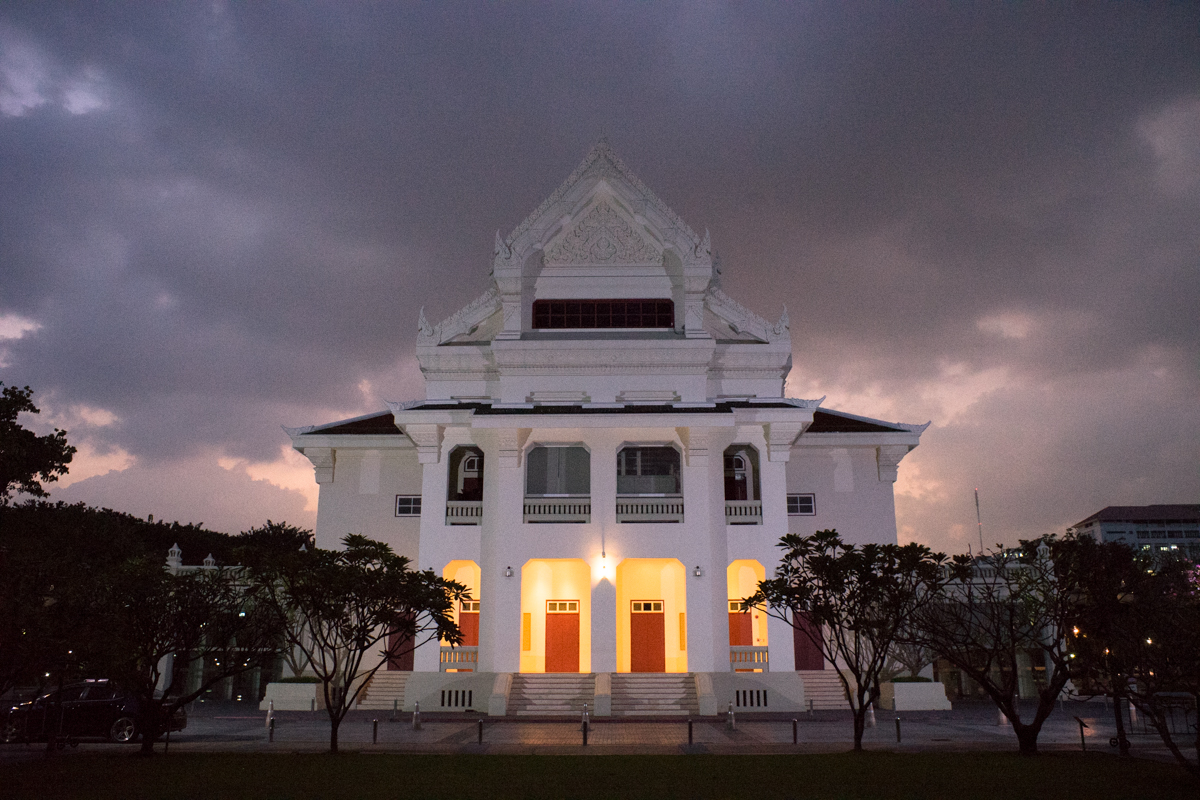